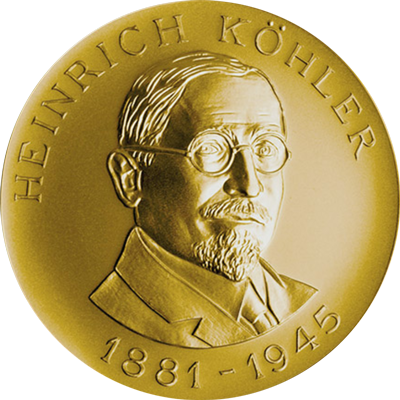 Articles of Association of the Heinrich Köhler Award

Heinrich Köhler, the founder of the oldest stamp auction house in Germany that exists today, contributed significantly to the development of the organised nature of expertising. The positioning system for expertising marks that he devised has lasted for seven decades. Right up to the present day the expertising of stamps in Germany is done according to the Heinrich Köhler method.

In 1932, Heinrich Köhler was the second German, after Dr Herbert Munk, to be given the honour of signing the “Roll of Distinguished Philatelists” of the British Philatelic Federation as one of the champions of international philately.

To perpetuate the memory of Heinrich Köhler, the Heinrich Köhler company of Wiesbaden (proprietor Volker Parthen), in agreement with the Board of Directors of the “Bund der Philatelistischen Prüfer e.V.” (Federation of Philatelic Expertisers – BPP) donates the

“Köhler-Award for outstanding services to expertising”.

The ceremony is performed by the Board of Trustees of the Köhler Award on the occasion of the Annual General Meeting of the BPP.

The Board of Trustees shall be composed of the following:

The second person mentioned chooses his/her successor personally. If a successor is not or cannot be chosen, the other members of the Board of Trustees will unanimously choose a successor.

The award takes the form of an 80g gold-plated, .999 fine silver medal, with a certificate. The award is given to persons or bodies that have given exceptionally meritorious services to expertising. Well-founded proposals maybe submitted at the end of each year by qualified persons.

The Board is not bound by these proposals and decides by a simple majority. The Board of Trustees may vote in a simple manner, such as in writing or by telephone, and it is to be done by 31 March.

An amendment of these Articles of Association requires the consent of all the members under 1, 2 and 4. In the event of the termination of the award ceremony, the Board of Trustees determines the use of existing resources.

Award winners since the inception of the award